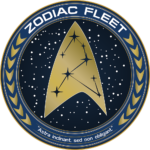 Welcome to The Federation’s 16th Fleet, also known as Zodiac Fleet, a roleplaying community built by gamers for gamers!

Created in 2001, Zodiac Fleet has been focused on providing a fun environment and is a 100% player driven group, so much so even our name was voted on by our players.

The Zodiac Fleet prides itself on offering a wide variety of options for our players. Primarily we feature Play By E-Mail and Play By Nova games spanning many genres including Sci-Fi, Star Trek, and Superhero options.

We are well known for our Continuing Voyages group, a collective of Star Trek games that have been around since our very beginning. Set in the 25th Century, Continuing Voyages focuses on the exploits of the storied 16th Fleet, a rapid response force that responds to galactic emergencies, diplomatic crisis, and explores strange new worlds throughout the galaxy. Due to the expansion of the Star Trek Universe, we have recently added a new Division called Continuing Missions that will explore the universe created with the upcoming series Star Trek: Picard!

We understand though that life does get in the way and we actively promote our players taking a look around every now and then and to see our story as a diversion from their daily lives. So if you’re looking for a group where you can make a real difference, where you can have fun and be part of a great story, and develop friendships with people from all across the Earth then you’ve come to the right place. On behalf of the Zodiac Fleet and its players I invite you to become a part of our story. Trust me when I say that you won’t regret your decision to be part of our game.

The future is yours!